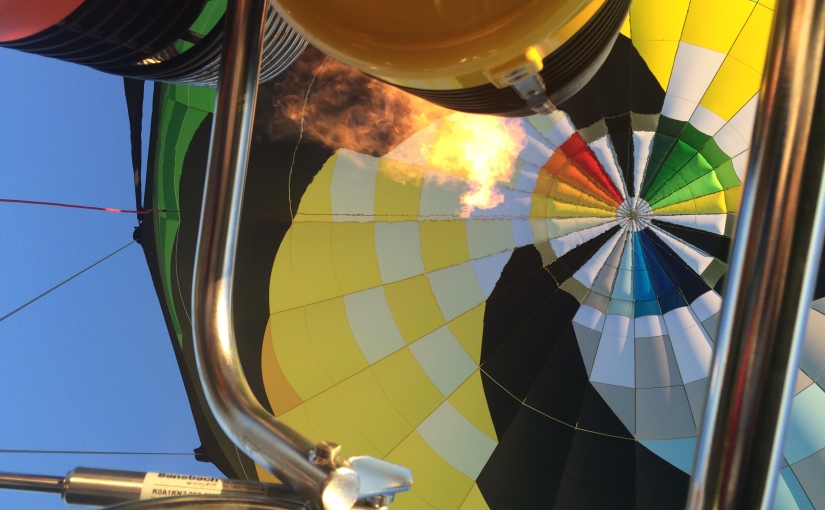 I have always been a back-stage, behind-the-scenes, supportive role kind of a person. People who know me very well, or even those who know me only superficially, might be a bit surprised by this, because I have a fairly extroverted, bubbly—one might even say bold—personality. But this goddess is the definition of multi-faceted.

When it comes to hot air ballooning, and everything that goes into this ludicrous and death-defying activity, I always preferred the CHASING to the FLYING. Flying was scary and I really didn’t enjoy it. Please don’t let my opinion dissuade you from going for it if you have never tried it! Every person I flew with LOVED it. I was just incapable of enjoying myself. I was too busy trying to control my involuntary trembling, hurriedly attempting to make my peace with God, and unsuccessfully pretending like I was having a good time so as not to be a royal buzz kill for the other passengers. 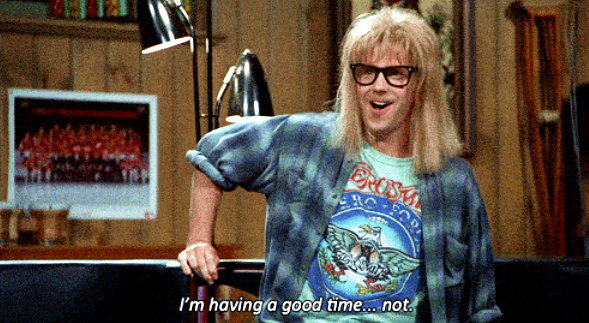 I have only ever flown in a hot air balloon twice. My first flight was the day after my twin sister’s wedding (I was the maid of honor) and I would say that I was a bit physically drained from hours of dancing and maid-of-honoring from the night before. So, I was not at my steadiest in terms of energy, but I was told that I would most likely get the chance to fly on this particular day, so what was I going to do, say no? Nope, I said YES to life—or death, however you want to look at it.

[Here I will skip a lot of details in terms of setting up for flight and will jump right to the lift-off segment of this nostalgic remembrance. If you want to read more about the crew aspect of ballooning, read my earlier post: HOT AIR BALLOONING ON THE EDGE, PART I: THE CHASE]

Once the crew had prepared the balloon for flight, everyone started scurrying around getting ready to move. Immediately, I was summoned to get into the basket, and it was made clear to me in no subtle way, that I needed to do this as quickly as possible. There was no non-awkward way to climb into this thing. The walls of the basket came up to the middle of my chest, and I’m 5’9”. And since we had only a few seconds to struggle with boarding the vehicle before lift-off, there was an added layer of pressure: physical struggle + rushing = humiliating distress. Somehow, I made it into the basket and we began rising swiftly towards the sun before I even really had time to steady my footing.

After a few moments, I started to become aware of my surroundings in the basket and felt an eerie, out-of-body horrification imbue my senses as I began shuddering incognito—this shuddering did not cease until 15 minutes after we landed. As I mentioned, I’m quite tall, and the contraption responsible for releasing those fiery bursts of flames into the big and beautiful envelope o’ pain, hangs very, very low in the basket—much lower than it should in my opinion—so during the entire flight, I never really felt like my skull was very safe or protected. Also, the basket was much smaller and wobblier than I ever foresaw. For some reason, I expected the whole thing to feel a bit sturdier, but if a person shifted his or her weight, the entire basket kind of shifted with it, like a row boat—a row boat floating hundreds of feet in the air. 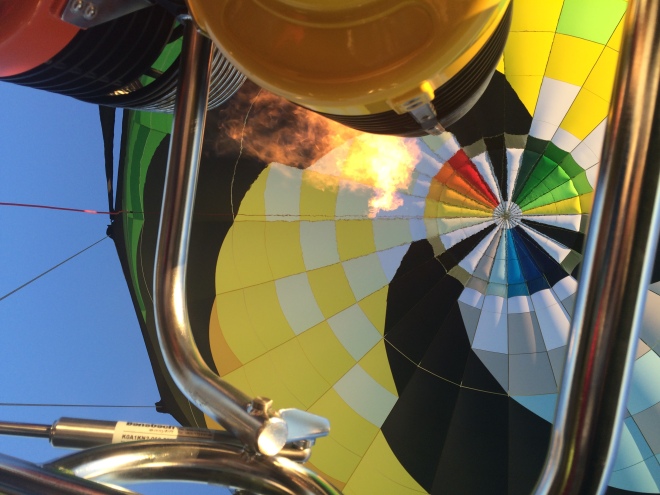 The actual flight was fine I suppose and I saw some nice scenery. But I was honestly really too terrified to enjoy it.

As for my first landing, I had absolutely no emotional or literal preparation, and it was really one of those moments in my life when I can recall feeling utterly present in my body, and at the same time, witnessing myself outside of my body, aware of the surreal nature of what was actually happening, and having absolutely no method of escape. It was honestly quite thrilling, and terrifying, and magical all at the same time. But it felt kind of awful in those moments. I just remember hearing two very clear phrases from everyone in the basket, only moments before we actually touched down. The landing strategy was pretty straightforward, and their unanimous command for me was, “Bend your knees. Both hands on the basket.”

Apparently, this particular landing was a rather rough one, even for the pilot. I recall the ground getting closer and closer to us, at a speed that felt WAY faster than what I would have preferred. In my mind I was thinking, “Are we really headed towards the ground as fast as it looks like we are? Because if we are, this is bad! Like, how are our bodies going to be able to survive this without reaching full and total pulverization? This is really fast. This is not good. Shiiitt!” My knees were bent and I had a death-grip on the edge of the basket, knowing full well that this stance was a rather pathetic defense against the violence of gravity. Then boom, we hit the ground, hard. The landing was definitely jolting, and I remember the sunglasses that were hanging on my shirt, popped off of my chest and fell to the bottom of the basket. I think my knees also felt a shot of painful vibrations, but it was short-lived. The landing actually wasn’t as bad as the emotional trauma of the approach and I survived without any injury.

Once we landed, the crew had just arrived and there were happy children and families standing around watching all of us get to work. The crew held down the basket as we climbed out of it…it’s really all a blur, so if it’s okay with you, I will just move on.

Flight number two was a bit more peaceful, but I must share the details of the landing with you or this post will have been all for naught.

This time we landed in a friendly field of some kind of growing crop. The owners were very nice, but this field was not really appropriate to land in and the pilot understandably always tried to avoid landing in places that might damage a person’s livelihood. However, in this case, this was the best that we could do. We were running low on fuel and every field seemed to be surrounded by power lines. So when this open area emerged, free of power lines and trees, we had to take advantage of this opportunity window.

Our crew arrived just after we touched down and could not really assist us with holding down the basket to keep it from trying to take off again. The air was also much breezier on the ground, so once we touched down, the envelope started to drag us and before we knew it, our basket—and our bodies—were parallel to the ground. As we landed and started dragging, I was positioned at the bottom of the basket, closest to the ground (I recall becoming very intimate, very quickly, with an abundance of fresh green, flat-leafed, harmless and unassuming plant life), and the passengers were above me, holding on for dear life. Here, let me show you a diagram, it’s easier: 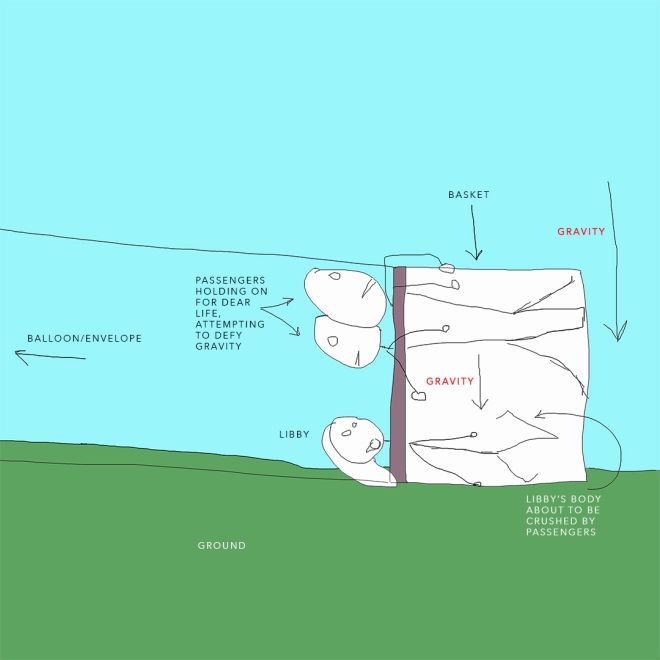 You can tell from this diagram that it’s not looking good for Libby in terms of avoiding ultimate crush-dom. All I remember is that my legs were bent in ways that they should not have been bent, and when both of the bodies of my friendly passengers landed on top of me, my incorrectly-bent limbs experienced an even deeper level of incorrectness, thus resulting in inescapable pain and intense discomfort. The initial pain was tolerable, but as the seconds passed, their bodies just seemed to get heavier and push deeper into my joints with an unintentional, yet relentless fury.

Just as the three of us started to became comfortable and overly familiar with one anothers’ body parts, the crew arrived. With the help of our chasers, the basket was turned upright, the apparatus was cleanly packed up and hoisted into our truck, and we drove away from this landing site, retelling the insane story to our unaware crew.

I know I’ve painted a rather horrific picture of this popular and globally-celebrated pastime, and I didn’t mean to. But these were my honest experiences, and I was truly terrified through much of it. Still, I have no regrets and am so glad I got to walk away—barely—with humorous memories and life-enriching fresh perspectives. That is what a goddess’s life should be about. And after all is said and done, I have a beautiful photograph of this Pennsylvania landscape to commemorate my time in the air, on the edge, in flight. #worthit 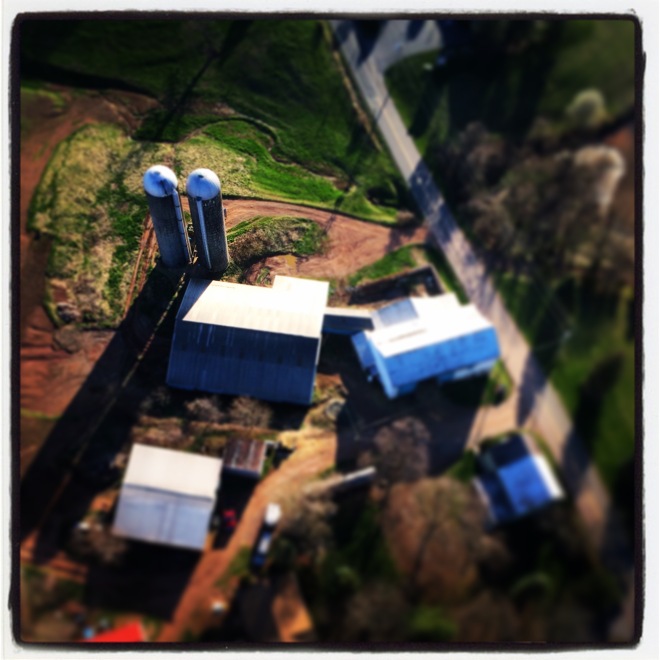 View from my second flight. I love PA! © Libby Saylor